Starting this month, ByCommittee Promotion & Tenure allows you to include any number of separate committees at any individual review step, instead of just one committee per step. It’s the newest installment in this year’s collaborative developments arising from direct input from our campus partners.

So let’s talk about the new capacity for multi-committee access, what our university partners needed it for, and how they’re going to use it.

Instead of the former “Case Review Steps” view, which had a kind of board game feel—each step with its own tile, strung together—now a ByCommittee Promotion & Tenure workflow looks something like this: 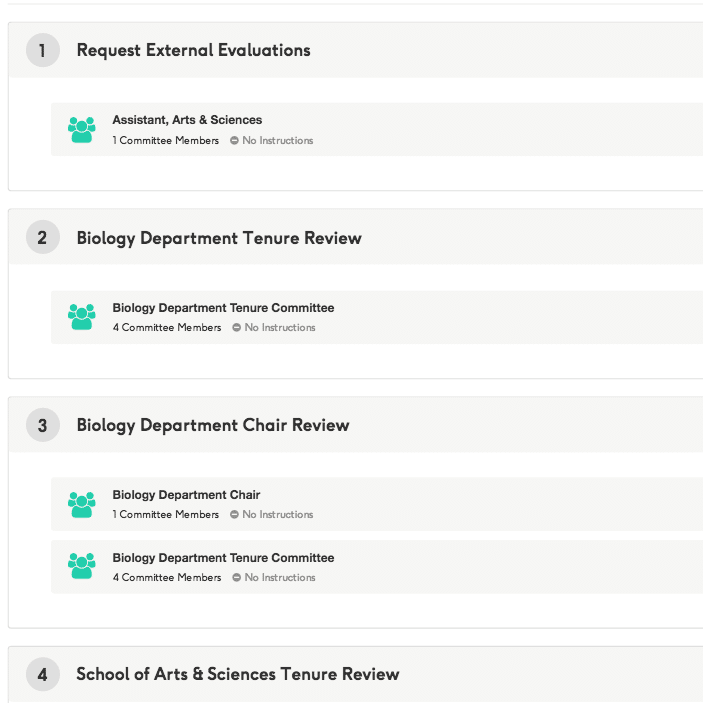 Why did we need it?

Before now, we had deliberately made it so that a digital candidate packet in ByCommittee could only rest “with” any one committee at any given time. That’s because we were trying to digitize the movement of the tenure “binder”—the physical bundle of papers that represents the candidate’s academic career.

Over time, though, we heard from at least half of the schools using ByCommittee Promotion & Tenure that sometimes they needed multiple separate groups to do different things at once with the candidate packet. So we separated out workflow steps from committees.

What, then, are people doing with multi-committee access in ByCommittee?

Example 2: Rebuttal/Complete transparency to the candidate

The challenge: At some colleges and universities—for example, some public institutions bound by collective bargaining agreements—the institution might be legally required to give a tenure or promotion candidate substantial access to their own case as it proceeds. In addition, in these cases, the institution may be required to give the candidate an opportunity for “rebuttal” after every review step. At the same time, obviously, the candidate is not a member of any of their own review committees, and should not have the ability to take actions as a committee member or alter their packet (except when invited to do so by the committee).

The challenge: Some schools have a tenure or promotion process in which every committee must retain some level of access to the candidate’s packet throughout the process, even after they’ve completed their specific review of the candidate. Since these previous committees are of course distinct from whatever committee is currently expected to complete their review, they can’t be “in the same room,” so to speak, as the current review committee.

As always, however, it’s really our partner campuses who will show us what’s most valuable about this feature and tell us what, if anything, they might still need. Let us know!

Any cookies that may not be particularly necessary for the website to function and is used specifically to collect user personal data via analytics, ads, other embedded contents are termed as non-necessary cookies. It is mandatory to procure user consent prior to running these cookies on your website.